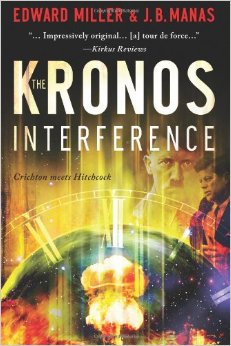 The Kronos Interference is an adventurous, mind-bending, time travel sci-fi thriller from Edward Miller and J.B. Manas. The book received a starred review in Kirkus Reviews, who named it to their Best of 2012, calling it “impressively original” and a “tour de force.”

HOW FAR WOULD YOU GO TO SAVE THE WORLD?

When physicist Jacob Newman is pulled from his family, his job, and his whole life to investigate a strange vessel discovered at the bottom of the South Pacific, he finds evidence of time travel, along with implications that a judgment day against mankind is imminent. But it isn’t until he cracks the time travel technology and uncovers a startling link to his own family history that he undertakes a dangerous mission back to 1924 to kill Adolf Hitler and undo a horrific episode of Earth’s violent past. The results are catastrophic, and soon he discovers much darker forces working against him—forces he must overcome if he hopes to save humanity and see his family again.

Written in the vein of the late Michael Crichton, James Rollins, A.G. Riddle, and similar authors who inject high concept plots with little-known historical facts and a touch of cutting-edge science, The Kronos Interference offers international intrigue, fast-paced action, and plenty of twists and turns.

“An utterly delightful and super-stunning thriller, this novel had me page-racing with its excitement and intrigue.” – Mallory Heart Reviews

About the Cover: The cover for The Kronos Interference was designed by award winning designer Kirk DouPonce of Dog-Eared Design, whose masterful work can be found on the iconic covers of books such as the Narnia series, Escape to Witch Mountain, and many more.

“In this time-travel thriller, debut authors Miller and Manas spin a clever, original variation on a classic alternative history premise: What if it were possible to travel back in time and kill Adolf Hitler?

Jacob Newman, a brilliant scientist and nanotechnology expert who consults with the CIA on projects of national security, receives a mysterious packet containing his German grandfather’s diaries from the 1920s, which detail a failed plot to poison Hitler at the beginning of his ascent to power. Although Newman’s wife is dying of cancer, a global crisis soon takes him from her bedside. An alien vessel has been found on the bottom of the ocean, off the coast of Chile. Inside the elegantly described “cavernous zeppelin shaped” space are eight giant floating monitors—arranged “like some sort of avant-garde Stonehenge”—that show images from horrific moments in human history, including the Crusades and the Holocaust. The ship also contains some strange pieces of alien technology; most notably a small object the scientists dub the Kronos Device, which, as Newman discovers, facilitates time travel. The scientists soon come to the consensus that someone or something has been sitting in judgment of humankind—and an ominous verdict could be delivered at any time. Inspired by his grandfather’s diary and desperate to afford humankind another chance in the eyes of the mysterious alien power, Newman decides to go back in time and ensure that the plot to kill Hitler is successful, thereby—in theory—erasing the ensuing heinous acts from history. Sci-fi fans will be familiar with what happens next: By interfering with the past, Newman inadvertently creates a future that is far worse. But here the novel displays some unexpectedly creative plotting: Newman’s attempt to undo the damage he’s done involves him in his own mind-bending parallel life, as well as the prospect of a harrowing sacrifice. The prose is unfussy, the pacing appropriately brisk, and the past and future sequences show the authors’ admirable imaginative gifts. Miller and Manas’ tour de force packs plenty of entertainment value, and the ending tantalizes with the possibility of future past installments.

“THE KRONOS INTERFERENCE twists facts and fiction into a heady and provocative adventure about time travel and humanity… Collaborating authors Edward Miller and J.B. Manas present an intricate, multi-faceted plot that brings together themes of time travel, parallel worlds, and man’s humanity (or lack thereof). Though time-travel concepts can sometimes be hard to wrap your head around, the authors manage to present the concepts of time travel relatively clearly, although sometimes the explanations are heavily driven by dialogue… Most intriguing is perhaps the descriptions of the past, the well-depicted street scenes and the meshing of fact and fiction about Hitler and his followers and the terror and they inflicted. In these scenes Newman’s character comes alive as he anguishes over his options with the knowledge and opportunities he has been given.”  IndieReader Approved

“An utterly delightful and super-stunning thriller, this novel had me page-racing with its excitement and intrigue. Science fiction, futuristic, historical, time-travel, extraterrestrial-this book has everything! I literally could not pause in the reading until I was finished, and I read with eyes wide and heart in throat… I highly recommend this to readers of thrillers, mysteries, metaphysics, history (especially World War II and pre-WWII Germany), and to all those who enjoy Dan Brown’s novels-just try this and you will be startled, amazed, and intrigued. If I could I would grant “The Kronos Interference” about 27 stars! Rest assured, this is a keeper and a rereader.”

“I couldn’t put this time travel mystery/thriller down. The story has a good balance between thrilling action and interesting character development, while posing very real philosophical questions on the advisability of tweaking time for whatever reason. The ending draws out a bit, but then there are quite a number of ends to tie up in a delightfully complicated plot involving time travel, aliens, murder and, oh yes, Hitler, who makes a cameo appearance. If you like time travel, I recommend this one. You won’t be able to put it down.”

More Praise for The Kronos Interference

“With The Kronos Interference, Miller and Manas have produced a high-concept thriller that will keep you on the edge of your seat. Through twists and turns galore, the authors take you on a wild ride that is physically and emotionally dangerous, morally challenging, and visually stunning. The story’s got everything: time travel, car chases, Adolf Hitler in Weimar Germany, alien technology, Freemasons, evil masterminds, super beings both friendly and hostile, a centuries-long conspiracy, and a surprise ending. I highly recommend this exciting debut effort by two writers you’ll definitely want to see more of.”

“This book is a real page-turner and I hope many readers catch on to these writers.”

… this is a superb high octane time travel mystery thriller and yes, it does indeed remind me of the great Michael Crichton but it also has an ambitious science fiction spin that I am sure Arthur C Clark would have approved… Although the synopsis appears somewhat basic and I dare say unoriginal, (how many stories have been written about someone going back in time to kill Hitler?), there is so much more [to this book] than just this apparently simple premise. There are several underlying mysteries that keep you guessing right to the end and it is an intricately woven tapestry of bigger sci-fi elements. The story is so cleverly structured, delightfully intertwining the time travel cause and effects, and is very well thought out.

But it’s the sheer pace and tension that really makes this a page turner. The protagonist very often finds he has to make difficult moral decisions which adds gravity to the narrative. . .  there are moments of striking emotion when I least expected it plus some exceptional conversational scenes, one in particular involving a very well known historical character, a scene that oozes brilliance.

The book also gives a wonderfully balanced thought provocation of human nature, their worth and your common sci fi religious/political musings. You are never too sure where it stands but you may get a fair idea towards the end leading up to the deliciously complex ending revelations.