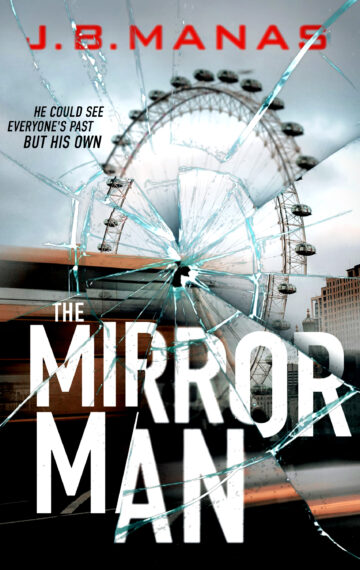 “A stylish and engaging crime tale.”

“An epic supernatural spy thriller that may be the first entry in a blockbuster franchise.”

“Brace yourself for a riveting ride that will keep you on the edge of your seat.”

In this Hitchcockian, international thriller from J.B. Manas, a reclusive writer with the power to read memories is forced by a mysterious stranger to steal government secrets.

HE COULD SEE EVERYONE’S PAST BUT HIS OWN

Julian Black avoids people. Tormented by the ability to experience their most intimate, painful memories with a single touch, he reluctantly begins using his skill to assist tenacious Philadelphia police detective Lela Mars. But his life is soon upended when he’s captured by an equally gifted man claiming to be from his past—a suave master thief who can make people forget.

Now this mysterious stranger is ordering Julian to obtain a vital government secret that could shift the balance of world power. With Lela Mars as his only ally, Julian faces an impossible choice: Comply or pit his wits against the world’s most secretive and deadly crime organization.

Globetrotting through London, Paris, and the French Riviera, The Mirror Man is a stylish, twisty thriller that recalls the danger, charm, and wit of Hitchcock classics such as North by Northwest and To Catch a Thief, and the high-octane adventure of the James Bond novels and films.

Editorial Reviews for The Mirror Man

“A stylish and engaging crime tale… The well-developed characters and their intriguing powers help set this thriller apart from the pack… This book blends many genres and handles each of them well… Manas generates an insistent sense of momentum that makes the reading experience tense and enjoyable.”

“An epic supernatural spy thriller that may be the first entry in a blockbuster franchise… Adding to the book’s charm is the way that The Mirror Man manages to feel urgent and contemporary without resorting to the over-the-top graphic violence and gore that has become so pervasive. That’s rare among thrillers today, and should earn the book wide readership. Highly recommended.”

“In The Mirror Man by J.B. Manas, one man can read memories and the other can make you forget. When the memory of a kidnapped scientist is tied to state secrets that could impact the balance of global powers, no expense is spared to retrieve it. This is the battle in which we find Julian Black and Sebastian Blaine. From opposite sides of the Atlantic, these two are on a collision course, but only one of them is aware of the other. Manas has married a modern spy thriller with speculative elements and old-school hints of Hitchcockian crime noir to establish a genre-busting, white-knuckle novel that will keep you turning the pages.”

“THE MIRROR MAN includes all the essential elements of successful suspense story writing—high stakes, conflict, drama, quick pacing, red herrings, cliff hangers, and a satisfying ending…  Strong, complex characters come alive on the page and drive the story forward, each with a distinct personality and unique motivation… Connections between characters are well-defined and robust—with one association in particular coming as a complete surprise… IR Verdict: A complex and intriguing plot, an abundance of action and outstanding characterization make THE MIRROR MAN a compelling read.”

“The Mirror Man is a sophisticated and high-energy book that ticks all the right boxes—suspenseful, engaging, and full of memorable characters. The action is nail-biting at times, and the storyline does not disappoint… Brace yourself for a riveting ride that will keep you the edge of your seat.”

“A beautiful blend of sci fi and thriller!”

“… so many surprises and twists and turns that I never knew what was going to happen next. I enjoyed the book so much that I was sad when the book ended. The ending was so surprising….”

“Julian Black is a wickedly well-crafted character that drives this story… Now he’s a pawn in a game that has no easy choices to make… A gorgeous, fun time. Highly recommended.”

“… a great blend of science-fiction & international thriller… The action was exciting and as I got further into the book it got harder and harder to put down.”

“… A definite page turner… The characters were well developed, and you can’t help but become interested in learning as much as you can about their past. Lots of great references, and written very colorfully – Philadelphia, Paris, London, you could visualize the locations. The story also had terrific plot twists.”

“I really enjoyed this book. The premise was unique and well thought out… The story is fast paced and the characters are believable. It was hard to put down once I started…”

“I thoroughly enjoyed this book’s great twists and turns. I read it in five days and couldn’t put it down.”

“… An enjoyable, fast-paced spy thriller with lots of action and science fiction elements… The glamourous London locations of the Shard and the London Eye add a little Ian Fleming flair.”

“A very interesting story that will keep you intrigued. Well written with strong characters. Will definitely draw you in and make you want more.”

“The Mirror Man was a wild ride, exciting twists and turns, easily one of the more exciting reads I’ve picked up in a while.”

“This is an excellent story with a unique premise. There is plenty of action and suspense, and a great cast of characters… I enjoy the traditional police procedural with its inherent car chases, kidnappings, and murders being mixed in with a touch of paranormal involvement. Be forewarned, when you pick this one up you aren’t going to want to put it down until the last page.”